Vision on Mission’s motto is “Doing it the Right Way is the Better Way!”

The logo of Vision on Mission depicts two men in front of the Trinidad and Tobago flag with a rising sun in the background. One man has chains on his wrists and is kneeling. The other man is standing, with a hand outstretched to the kneeling man.

In the background, the flag represents Trinidad and Tobago and the rising sun represents our beloved country slowly but surely embracing the philosophy of Restorative Justice.

About Vision on Mission

To be the principal provider of rehabilitation, reintegration and resettlement services for prisoners, ex-offenders, deportees, delinquent youth and socially displaced persons. To be the cornerstone from which lives are transformed by the power of the Holy Spirit of The Almighty God.

To reach out to every prisoner, ex-offender, deportee, delinquent youth and socially displaced person, irrespective of race or religion, going beyond the offense, reaching out to the offender, to restore a positive, productive, law-abiding citizen to the communities and by extension, the nation and the world at large.

Vision On Mission is a Non-Governmental Organization (NGO) that has been in existence since 1995 and was incorporated on the 17th August, 2001 under the Trinidad & Tobago Companies (1995) Act.

Vision On Mission is non-denominational with responsibility for the reintegration and rehabilitation of prisoners, ex-offenders, deportees/returning nationals, delinquent youth and socially displaced persons. 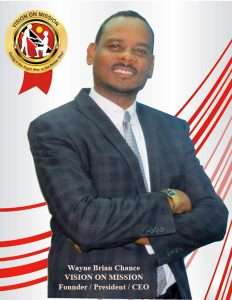 The Founder and Executive President, Mr. Wayne Chance, founded Vision On Mission in 1995 within the Port-of-Spain prison during his incarceration. Mr. Chance recognized the steadily increasing population of young men within the prison system. Mr. Chance, himself, who was also incarcerated at the tender age of nineteen, hails from the community of Arima, Trinidad, W.I., and from a family of seven as the eldest child.

Vision On Mission offers numerous programmes and services in our efforts to reduce recidivism, aid in the prevention and suppression of crime, social displacement, and youth delinquency. We conduct on a daily basis, our Preparation for Release Programme throughout the region’s penal facilities; we provide services by way of our reintegration in-transit facilities, group and individual counselling sessions, mediation services, and a great amount of community and outreach services to our citizens.

Our Board of Directors 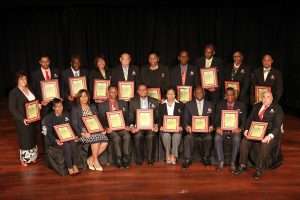 Our highly skilled experts that sit on the Board of Vision On Mission contribute their years of experience and knowledge in the areas of Corporate Governance, Security Operations and Risk Management, Psychology, Law, Human Resources, Leadership Training and Education, Accounting and Finance, to name but a few. 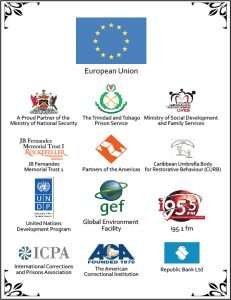 The work of Vision On Mission has been of a vested interest throughout the years, to many organisations and governmental bodies who believe in the work that we do with ex-offenders, deportees, and the delinquent youths throughout Trinidad and Tobago.

Donate To The Reduction In Recidivism And Creating Safer Communities

Each donation goes towards the operations of the varied programmes and services provided to VOM’s clients.